There are two types of the compulsory mixer: twin-shaft mixer and single-shaft mixer. What are their differences? There is an analysis from the mixing performance, abrasion resistance, discharging performance, transmission system,etc. 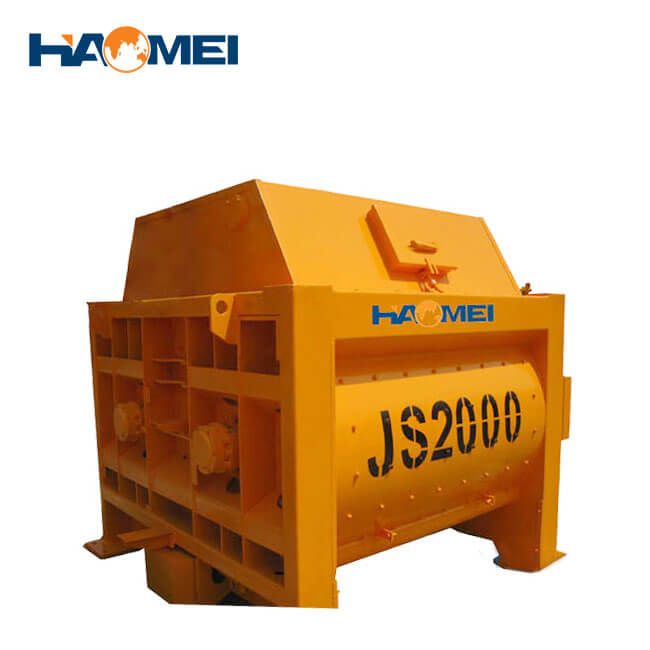 The mixing process of the China twin shaft concrete mixer not only occurs in the radial direction, but also in the axial direction. Therefore, the mixing space can be fully utilized an the concrete materials can realize the best mixing effect in a short time.

The mixing principle of the single shaft concrete mixer is basically similar to that of the rotary mixer. The rotation of the mixing shaft is to raise the concrete to a certain height and then make it fall freely to complete a mixing process. Therefore, when the single-shaft mixer is in use, the effective working volume is smaller than the theoretical design volume, and the height of the whole machine is much larger than that of the twin-shaft mixer.

The mixing principle and process of the twin shaft concrete mixer ensure that most of the materials are accumulated between the two mixing shafts, which reduces the wear between the mixing shaft and the blades and the bottom liner.

The liner of the twin-shaft mixer can be made of ordinary steel plate or wear-resistant cast iron according to the operating conditions.

Due to the higher circumferential speed of the mixing blades and the rotating trajectory of the blades, the wear of single-shaft mixers is greater than that of twin-shaft mixers. The single shaft mixer need to use special steels, which also has a higher maintenance cost.

For the single shaft concrete mixer, due to the limitation of the system structure, the opening size of the discharge door is difficult to adjust, which will have a greater impact on the discharge of different proportions of concrete.

The single-shaft mixer adopts a chain drive structure, which increases the wearing parts, and at the same time generates additional vibrations, leading to the high maintenance cost.

As a twin shaft concrete mixer manufacturer, Haomei Machinery has seven models from 0.5 m3 to 4 m3 per batch. Welcome to leave message below to get a quote.

Next: What Are The Advantages of China Twin Shaft Concrete Mixer