JS 500 mixer is a popular model of twin-shaft mixers. The twin shaft refers to the two mixing shafts in the mixing drum. In addition to these two main shaft, there are also 14 mixing shafts and countless pairs of mixing blades in the js 500 concrete mixer.

The working principle of the twin-shaft mixers is to make use of blades on the mixing shaft in the drum to realize the even mixing of the material. Therefore, the mixing efficiency and quality greatly depends on these components. Do you know how does them work? 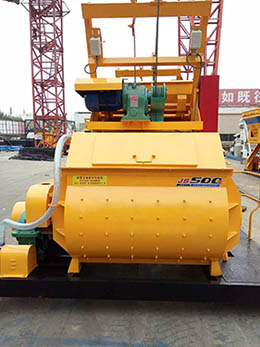 There are two arrangements of the mixing shafts: convection arrangement and surrounding arrangement.

The convection arrangement of the js 500 mixer’s mixing shafts is shown in Figure 1. Under the impetus of the stirring blade, the mixture moves from the two ends of the mixer to the center, and is stacked in a cone shape at the center.

At this time, some materials will overflow from the top of the material pile, flow to the two ends of the mixing drum, and then be pushed back from the two ends to the center by the blade, thereby completing a cycle of material mixing.

At the ends of the two shafts, there are return blades each to push the mixture from the one shaft end to the other shaft, so that the mixture completes a large circular motion.

Prev: What Are the Structural Features of Self Loading Concrete Mixer Truck

Next: How to Set Up A Batching Plant with 500 Cubic Meter